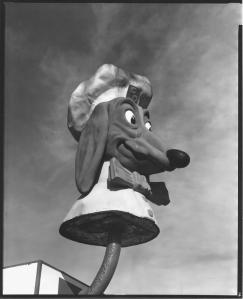 I was on the corner of West Macarthur and Telegraph when I was kidnapped. There was some kind of rivalry over drugs and money that led to these circumstances. The details are still unclear to me. I do remember the neon lights from the Doggie Diner, a hamburger stand that used to overlook the ho-track. I can still hear the cacophony of sounds that emerged from that street corner. The voices of whores cat-calling johns and the ever present reality of junk sickness that lingered in the air.

My mother and I were on our way from the hotel where we lived to get dinner when we were attacked. We were attacked with such precision, that before my mother even hit the ground, I was thrown in the back seat of a car and the door slammed shut. The back seat of that Cadillac seemed huge and when the door closed it was like I was in a vacuum. All that was visible at the time were two huge black men beating my mother under those neon lights of the outdoor hamburger stand. I was witness to this violence. I could see them swinging, kicking, screaming, but from the backseat of the car all I heard was a deafening silence.

I was taken to a two story Victorian house, near the Macarthur Maze freeway structure. The house was surrounded by chain link fence.  I was made to sleep in a huge bed, with some fat ass black woman. Her house smelled of grease and there was junk piled up above my head everywhere. We would eat in the morning and at night (fried eggs and grits). It took me years to stop relating grits to this scenario. Despite my circumstance, I believe she meant me no harm. I did what I was told, and nothing else. I was paralyzed with fear.  I never shed a tear the whole time I was there. This may be where I learned to stuff my feelings.

It is crazy when you think about it, you can force your feelings down or try to cover yourself with pompous ego. Still the truth has to come out.  At this point it started to come out in my dreams. I would dream of being with my mother. In my dreams I would feel the safety a child feels in his mother’s arms. She used to always say to me, “I asked God for a little boy and he gave me you.”  Then I would fucking wake up in the bed with the fat ass bitch who smelled.  I was eight years old and I was kept in this house for three weeks.

The day that Nana came to get me, I remember walking out the front door. It was night and the cold night air felt refreshing on my face. I could see the light from Papa’s light blue ‘64 Riviera in the middle of the street. I walked to the car very slowly, as if any sudden moves might cause the car to disappear. My body began to weigh a million tons but still I put one foot in front of the other. The fat black lady and Nana were talking. I could see Nana was saying something when I walked up. I started to cry for the first time in weeks. I could feel it coming out in a purging of emotions. The fat black lady tried to wipe my face, but Nana grabbed me, said something mean and put me in the back seat as Papa waited in the driver’s seat. Nana got in the front and she was pissed. I tried to keep my crying down as I did not want to piss anyone off.  I thought to myself, why was Nana so mean to fat lady? Why is she so mad? I hope Nana is not mad at me. My grandparents took me to their home and put me to bed. I continued to cry throughout the night.

I was alone for the first time in a long time. It was me and my fear, all alone in my grandparents’ house. I knew they were in the next room and I even knew I was safe, but I could not shake the fear. As a matter of fact, at that age I could not even identify it as feeling, it was just how I felt constantly. Feeling.

I understand my trauma like this: I was a child who people failed to protect. This created a fear-based thinking in my core. My circumstances may be very dramatic but the universal feeling of fear is something most people can identify with.  One solution to my fears today is to talk about them with others, not just what happened to make me fearful but how fear is a universal feeling no matter what has happened to you. As a child, if you ever felt that the people who were supposed to protect you failed, then you may know fear.  There is a solution to fear, it is unity.  In the process of communication we find that fear is just an illusion and the illusions must be smashed.

One thought on “Trauma”