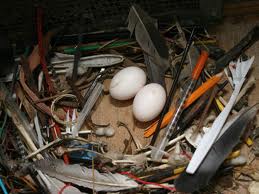 Local artist Sham Saenz took a picture of a bird’s nest outside of a nightclub, and it’s the work of a gifted installation artist, a found-filth purveyor on par with the art world’s greatest grit slingers. Yes, we’re referring to the bird. Saenz says he didn’t alter the nest, which isn’t constructed with the usual twigs but rather plastic utensils and inner-city detritus. The most shocking thing about it? The syringes. Followed closely by the two eggs sitting there in their wholly unnatural environment. Saenz’s photo, and a video of the chick that later hatched, are part of “Swan Songs,” a strongly curated show by Chris Fitzpatrick. Dealing with ends and beginnings, the exhibit also includes Yvonne Mouser’s handcrafted, charred-black table and Mark A. Horton’s text recollection of his near-death experience in 1992, which takes on new meaning now that the artist is dead. The prettiest efforts are courtesy of Robert Gendler, whose astrophotographs light up your imaginations with all their glowing interstellar dust and shining orbs. As you might think, astrophotography is not a point-and-shoot endeavor. For years, Gendler would wheel a huge telescope out of his garage, cover a nearby streetlight, and while away the nights with multi-hour exposures. Recently he lucked into a little observatory in New Mexico, and the results, such as M42, The Great Nebula in Orion, are stunning. All that work has paid off: Gendler’s work has appeared in hundreds of magazines, he’s set to receive the Hubble Prize at the 2007 Advanced Imaging Conference, and he even got a stamp (it’s a U.K. stamp, but still). An opening reception starts at 6 p.m. on July 28 (and the exhibit continues through Aug. 24) at Hamburger Eyes Photo Epicenter, 26 Lilac (at 24th St.), S.F. Admission is free; call 550-0701 or visit http://www.burgerworldchronicles.com.